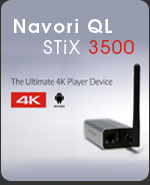 The Second Generation of digital signage has arrived.

Navori has introduced their new Android-based digital signage media player, QL STiX 2400, a plug-and-play device with the power of a PC at a fraction of the cost and size.
The new media players are a highly cost effective digital signage solution. They are based on the Rockchip ARM processors similar to those used in mobile devices.
The Rockchip components provide roughly the same quality and power of a PC with no limitations when compared to the Windows-based platforms.
The STiX 2400 can be used with either the self-hosted server or the Navori SAAS solution. When used with SAAS, the STiX is a true plug and play device.
The player measures 90mm x 40mm x 10mm and is compliant with Windows-based networks..

The Android device was designed to run efficiently with the Navori QL player software.
The new player can run beside the Windows players and supports ten video formats up to 1080p, images, flash, html, streaming and IPTV.
The Navori multi-layer and multi-zone templates are supported along with RSS XML feeds.
The Android device maintains Navori’s real-time moniting with alerts, events and notifications through either the manager dashboard or email and continues to provide detailed playback reporting.